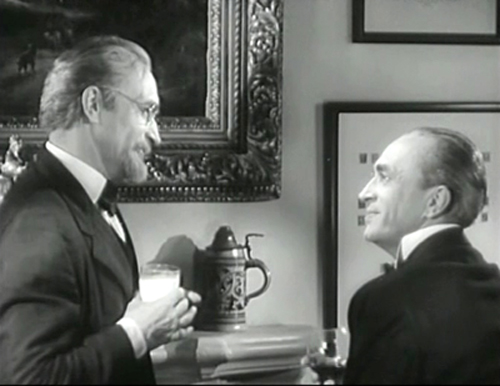 A little seen war time movie. It was the first movie directed by Jules Dassin who would go on to direct Brute Force, The Naked City, Thieves' Highway, Night and the City, Rififi, Never on Sunday and Topkapi. Just for being the first movie of such a good director I would say that this is a movie that needs to be seen.

The plot of this propaganda war film may sound a little campy, but it worked for me. Conrad Veidt, who made starred in Casablanca the same year this was made, plays a dual role here. He plays twin brothers, one of whom is Otto Becker, a bookstore owner who changes his name and becomes an American citizen after leaving German. His twin brother, Baron Hugo von Detner, is a Nazi diplomat and agent.

In his review Leonard said: "Slow-moving, rather arid tale that could have been mush better."

The movie was a little talky, but it the propaganda war film aspect made it interesting. Here we have a movie with twins, one going on the right path and one going on the wrong path, and the movie is going to try to make sure you know which path is correct and why it was. I also didn't think the movie was slow or arid.
Rather than reveal anything else about the plot, I'll let you see it for yourself. But it was great seeing the early work of Dassin and it was also great seeing Conrad Veidt, who would die, much too young, the next year. Veidt, although mostly a character actor, seemed to dominate every scene he appeared in.

An interesting story that I think should be seen.