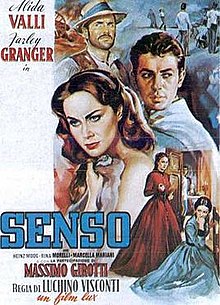 
Luchino Visconti departed from his earlier neo-realism and into the realm of melodrama and history. The story is set in Italy in the 1860s when Italy was trying to break away from Austrian rule.

Alida Valle plays an Italian Countess who is trapped in a loveless marriage, and is swept off her feet by an Austrian officer.

The office lets the audience knows that he is just playing with the affections of the countess, and is really just after her money. The Countess gives Franz the money, which had been intended for the Italian troops resisting Austria. Franz, played by Farley Granger, uses the money to bribe a doctor who gets him  released from his army duties.

When the Countess goes to see Franz, she finds him with a prostitute and he laughs at her distress. She has betrayed her family and her country for this homme fatale.

The Countess stumbles out of Franz's rooms, but she does have a letter he sent her thanking her for supporting him in bribing the doctor for his note. In the last scene we see Franz being dragged out and shot by the Austrian troops.

The movie had a real noir feel to it, even though it was Italy's first color film, and was filmed in splendid color by Visconti.

Leonard seemed to like the movie in his review, calling it "An intriguing union of the neorealism of Visconti's earlier work and the lush romanticism often found in his later films." I have no idea why he only gave it two and a half stars because he doesn't tell us.

I think the film was at least as good as Visconti's critically acclaimed The Leopard, which was filmed nine years later. You can read a good review of the movie here in Roger Ebert's Great Movie reviews.