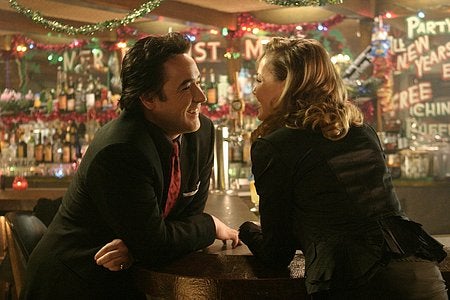 Rotten Tomatoes Rating :  46%  (with critics)
"Critics Consensus: The Ice Harvest offers a couple of laughs, but considering the people involved, it should be a lot funnier."

In his review Leonard says: "Mostly unfunny black comedy must have worked better on the pages of Scott Phillips' novel"

I think most people missed the point of this movie. It had some comic relief, but it wasn't a comedy. It was a really good neo-noir.

Charlie was a flawed man and he knew it. He didn't visit his kids too often, and he missed their plays. He made them promises he didn't keep. He drank too much, hung around in strip clubs and was a lawyer for the mob. And like all flawed men, he had the potential to be dragged down by the femme fatale.

The movie didn't work as a comedy, but I think it really worked as noir. It was in color, and it had some comic relief but at its heart it was still noir.

Roger Ebert gave the movie 3 stars and said: "I liked the movie for the quirky way it pursues humor through the drifts of greed, lust, booze, betrayal and spectacularly complicated ways to die. I liked it for Charlie's essential kindness, as when he pauses during a getaway to help a friend who has run out of gas. And for the scene-stealing pathos of Oliver Platt's drunk, who like many drunks in the legal profession achieves a rhetorical grandiosity during the final approach to oblivion. And I liked especially the way Roy, the man in the trunk, keeps on thinking positively, even after Vic puts bullets through both ends of the trunk because he can't remember which end of the trunk Roy's head is at. Maybe it's in the middle."

It's different, it's quirky and I think it was really good.