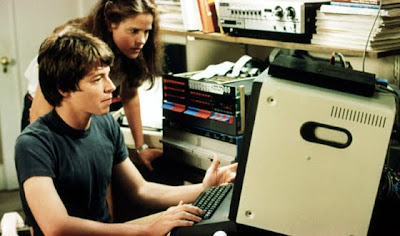 Rotten Tomatoes Synopsis : " A landmark of 1980s cinema, WARGAMES was keenly tuned into its time. Computers remained a relative mystery in the early 1980s, as they were used primarily by large corporations and government agencies, but not by many individuals at home. The general public had already been warned of the danger of computer takeover in 1968 with 2001: A SPACE ODYSSEY and this paranoia grew as computers became more popular. The threat of communist takeover and nuclear war loomed large in the collective consciousness, before the fall of the Berlin Wall and the end of the cold war. Video games had become highly popular, however, and for a generation of Pac-Man and Space Invaders players WARGAMES combined the country's deepest fears with its biggest fantasies. Badham's suspenseful film brings those fears to light in an exciting, fast-paced film with a great cast"


I remember watching this movie when it first came out and I really loved it. The ability to access the school's computer from your house, software backdoors, game playing machines, doomsday machines : this was all new stuff and it was exciting and very interesting.

Leonard says in his review : "FailSafe for the Pac-Man generation .." He goes on the say : "Entertaining to a point, but gets more contrived as it goes along, leading to a final straight out of an old B movie. Incidentally, it's easy to see why this was so popular with kids : most of the adults in the film are boobs."

I don't see what's wrong with having a FailSafe for a younger audience. So much of the material that is aimed at teens is trashy and silly. This film is intelligent and wholesome.

Even though the technology it was portraying is antiquated in today's world, I still think the movie holds up pretty well. A really good teenage flic.