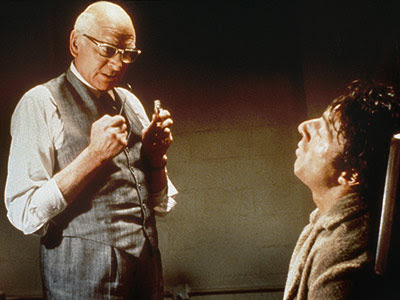 Rotten Tomatoes Synopsis : A classic suspense thriller (based on the novel by William Goldman) rife with chase sequences, torture, and political intrigue. A landmark film that pushes the boundaries of audience squeamishness, Marathon Man features a powerful performance by Hoffman alongside equally stellar work by Sir Laurence Olivier and Roy Scheider.


Leonard says in his review : " Basic story of graduate student Hoffman propelled into dizzying world international intrigue spoiled by repellent violence and some gaping story holes. Hoffman and arch-villain Olivier are superb but film doesn't do them justice."


I'd pay to watch these two in anything and the movie surrounding them was pretty good too. The plot was just OK, but the acting more than made up for it.

Olivier, playing a Nazi war criminal, has an iconic scene where he questions Hoffman, while wheedling his dentist tools, "Is it safe?" Very scary stuff.

People who like thrillers and haven't seen Marathon Man should put this at the top of their list.