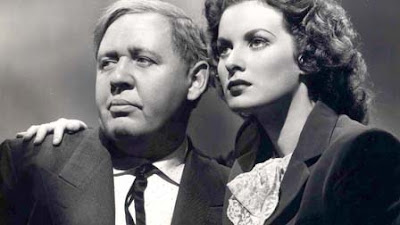 Rotten Tomatoes Synopsis : Renoir, pained by the contempt of Americans for the seeming ease of France's capitulation to the Nazis, hoped to mitigate their disdain with this portrait of life in an occupied country. The patriotic flag-waver features a fine performance by Laughton.


Jean Renoir, Charles Laughton, Maureen O'Hara, Walter Slezak and George Sanders : the movie is well worth watching just to see these greats at work, but the movie is so much more than just the performances.
One amazing thing about the movie is that it presents the Nazis as human beings. They philosophize about how much Hitler has done for Germany. They are polite to women. Renoir is careful to present the soldiers as normal people who are just doing their duty. Renoir has the courage to let the Walter Slezak character, major Von Keller defend the Nazi position. Von Keller says :

"Of course, we Germans could take over the courts, schools, town halls, the administration of the whole country. But we’re not tyrants – we prefer not to do that. We prefer to collaborate, to give freedom to the nations we defeat on the battlefield. But freedom must be limited by the necessities of war. We’re still fighting on other fronts. It’s a very small sacrifice we ask of you, when we are still sacrificing our lives for the future happiness of the world."


I think this was an amazing movie. It’s shocking that Renoir could make a movie that is so even-handed given what was going on at the time it was made. He tries to present all the different sides and points of view, and lets the viewer decide for themselves what is best. The movie is much more effective by showing Nazism and collaboration as a philosophy that many people could and did philosophically accept and justify.
Ultimately the film is a propaganda movie pleading with the French people to fight for their freedom against the evil invaders and also warning the Americans and British it could happen to them also.
Dated? I think not. How many people in the world today are living under governments that are taking away the peoples' freedom in exchange for the peoples' "happiness"? The debate about freedom vs. security is perhaps more relevant today than it was in 1943.