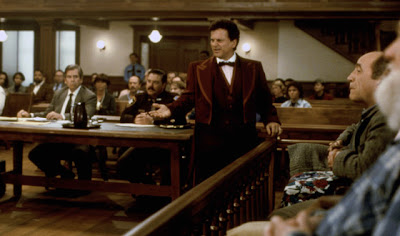 Rotten Tomatoes Synopsis : New York City lawyer Vinny Gambini ventures into the deep South with his loud-mouthed, big-haired girlfriend in tow to free his cousin Bill and Bill's friend after they are mistakenly accused of murdering a convenience-store clerk. Unfortunately, Vinny passed the bar (after 6 failed attempts!) only a few weeks before, and has never even seen the inside of a courtroom. But no Gambini has lost an argument yet..


Leonard says in his review : "Very likeable (if much too lackadaisical) comedy .. But there's no reason for this simple comedy to take so long to get where it's going."
Mr. Maltin thought the movie was too long. He must have had a couple of reviews to do that day, because I enjoyed every minute of this little comedy.

It was a lot of fun watching the interplay between Vinny Gambini (Joe Pesci) and Mona Lisa Vito (Marisa Tomei) as they traded barbs back and forth. I also thought the writing was really good.


"Perhaps the laws of physics cease to exist on your stove. Were these magic grits? Did you buy them from the same guy who sold Jack his beanstalk beans?"
"'Cause Chevy didn't make a 327 in '55. The 327 didn't come out til '62. And it wasn't offered in the Bellaire with the 4-barrel carburetor til '64. However, in 1964 the correct ignition timing would be 4 degrees before top dead center."


I'm really surprised Leonard didn't rate this good, clean comedy higher. So much of the humor that is aimed at teenagers these days is junk relying on vulgarity and gross-out humor.

My Cousin Vinny is a really good movie, well worth seeing by everyone.