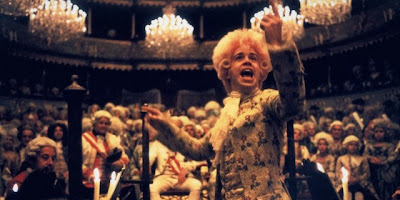 Rotten Tomatoes Consensus : "A lavish, entertaining, powerful film about the life and influence, both positive and negative, of one of Western culture’s great artists."


Amadeus is one of the greatest movie biographies ever made and Leonard just can't show it much love. He says : "Literate, intelligent, exquisitely filmed but fatally overlong and missing dramatic fire..."

Wow! Missing dramatic fire! Overlong! I loved every second of this movie. In one of the scenes in the film Mozart is told that his composition has "Too many notes" to this he replies "There are just enough..." That kind of sums up my thoughts about the length of this great movie.

In addition to being a great biography of Mozart it was also a great look at Antonio Salieri (played by F. Murray Abraham), who really stole the show.

Great music, great drama, great stuff. Should be seen by all.