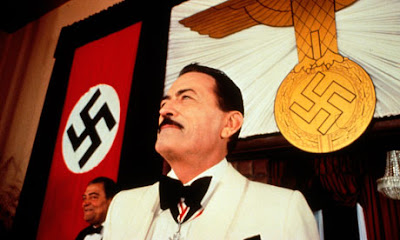 Leonard says in his review: "Interesting but ultimately silly and unbelievable; worth watching, though, for Olivier's brilliant, credible performance as aging Jewish nazi-hunter."

Almost all the reviews you read about this movie say the same thing ; It is silly but it is very watchable.

I think that the movie really works because director Franklin J. Schaffner does the same thing here that he did in Planet of the Apes, he plays it straight, and it works. He could have presented both movies in a more campy way and could have let the audience know that he was in on the joke, but he didn't.

I have always loved this movie, and for me, watching Lawrence Olivier, Gregory Peck and James Mason was reason enough, but I liked the story too. It plays out like a scientific mystery, and the first time I saw it I was enthralled.

Perhaps, because of advances in science, it is a better, more believable movie today than it was in 1978. I agree with Leonard that it is worth seeing, and I think it deserves a higher rating.