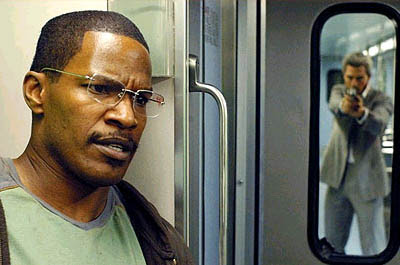 In his review Leonard says: "Crisp action thriller, well shot in a digital format on L.A. locations, builds interesting characterizations, then tosses credibility down the drain during the climax. Still quite watchable, with a strong supporting cast backing up the stars."

The movie is about a cab driver Max (Jaime Fox), who picks up a fare, Vincent (Tom Cruise), who hires him for the night. Vincent has five appointments and Max soon learns that they are hits.

As the night goes on we learn more and more about Max and Vincent, and we also start to learn the story behind Vincent's assignments.

The acting is really good in this exciting action thriller.

Leonard didn't buy in to the ending, which I can understand, but in no way can that ruin the whole movie. What I don't think Leonard understands is that many people will only watch movies that have a 3 star (or 7.0 on IMDB) rating or better. To give this very good movie only 2 1/2 stars is not doing it justice. His book is supposed to be telling people whether they will enjoy the movie or not. not whether he found a flaw in it. Look at the RT and IMDB ratings - they enjoyed it.