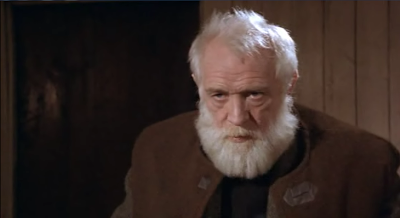 In his review Leonard says: "Grim tale of deep-rooted stubbornness (and provincial clannishness) plays out like a Greek tragedy, and despite Harris' towering performance, becomes aloof and largely unmoving."

Set in Galway, western Ireland in the 1930s, the movie take a look at "Bull" McCabe (Richard Harris). The movie starts with Bull and his son, Tadgh, throwing a dead donkey off in to the sea and then off harvesting seaweed. It's a hard life but he has made a great field with his seaweed fertilizer. He has been renting the field for ten years from a widow and he keeps wondering if she is ever going to sell it.

One day the widow walked in to the pub and announced that she wants to sell the field. The men in the pub say that Bull made the field from a pile of rocks, but the widow said it shall go to the highest bidder at public auction. No one in the pub thinks anyone will bid against the Bull. It's then that we find out that donkey was killed because it dared to step in to the Bull's field.

The "Bird" O'Donnell (John Hurt) rushed over and told the Bull that the field is up for sale. The Bull goes to the pub and says that no outsider will get the field from him. He will give her 50 pounds and they will all be happy.

We learn that Bull hasn't spoken to his wife in eighteen years, and that Bull's other son had died. Bull is very concerned about getting a wife for Tadgh and getting him settled down so the McCabes can live on forever. An American (Tom Berringer) shows up and the people in town begin to wonder about him.

At the auction the American starts bidding against McCabe and then the widow, who has lived in fear of her life for ten years (without Bull knowing it Tadgh and Bird had been tormenting her) , comes out and puts a reserve of 100 pounds on the field. The widow, who is English, says she is going back to her own people. The American says that he will buy it, but the Bull warns him from doing it.

When the priest takes the American's side they have a conversation.
"Bull" McCabe: Why're you interfering, Father? This is none of the Church's business.
Father Doran: It's the Widow's field. She has the right to sell it.
"Bull" McCabe: No. It's my field. It's my child. I nursed it. I nourished it. I saw to its every want. I dug the rocks out of it with my bare hands and I made a living thing of it! My only want is that green grass, that lovely green grass, and you want to take it away from me, and in the sight of God I can't let you do that!
Father Doran: Can't you find another field?
"Bull" McCabe: Another field? Another field? Jesus, you're as foreign here as any Yank. Another field? Are you blind? Those hands, do you see those hands? Those rocks! It was a dead thing! Don't you understand?
Father Doran: This is the Widow's field. That's the law. The common law.
"Bull" McCabe: There's another law, stronger than the common law.
Father Doran: What's that?
"Bull" McCabe: The law of the land. When I was a boy, younger than Tadgh there, my brothers and sisters had to leave the land, because it couldn't support them. We wasn't rich enough to be priests or doctors, so it was the emigrant ship for all of them. I were the eldest, the heir. I were the only one left at home. Neighbours were scarce. So my father and I, we had our breakfast, dinner, and tea, working in that field without a break in our work. And my mother brought us the meals. One day, one day my father sensed a drop of rain in the air and my mother helped us bring in the hay before it was too late. She was working one corner of the field, and I was working in the other. About the third day, I saw her fall back, keel over so to speak. I called my father, I run to her. My father kneeled beside her. He knew she... he knew she was dying. He said an act of contrition into her ear and he asked God to forgive her her sins. And he looked at me, and he said, "Fetch a priest." Fetch a priest... And I said, "Let's - let's bring the hay in first. Let's bring the hay in first. My father looked at me with tears of pride in his eyes. He knew I'd take care of the land. And if you think I'm gonna face my mother in Heaven or in Hell without that field, you've got something else coming. No collar, uniform, or weapon will protect the man that stands in my way."

The American wants to buy the field so he can build a road to access limestone in the hills for concrete, for new roads. Bull goes to the pub and tells the men that the American is a robber. He tells them that if the Guards come they are to tell them that they played cards all night, and then Bull and Tadgh head out to give the American a beating to teach him a lesson. Tadgh and the American fight and the American beats him up pretty good. Bull then hits the American with his stick, and then he hits his head on a rock saying that he is trying to shame him in front of the village. Bull has killed the American by accident.

At the auction the Bull gets the field, as Bird bids for him. Bull goes back to his cottage, suffering, and to his shock his wife says "Don't break." She says "If you break who will look after the land. He's not ready yet." She tells Bull that he wasn't to blame for their other son's death. We find out that Bull had been saying that the land was only enough for one, and Tadgh was going to have to emigrate. We later learn that Tadgh's brother hanged himself.

When Tadgh leaves with a tinker's daughter Bull sees that it was all for nothing, and the tragedy is almost complete.

Great scenes of 1930's rural West Ireland in this movie based on a famous play by John B. Keane. Richard Harris was deservedly nominated for a Best Oscar Actor, and John Hurt might even have been better. A really good movie about the Hunger and the need for land, that perhaps, can only be understood by the Irish who went through it. A wonderful movie with some great performances.

There were no heroes in this movie, and there was no happy Hollywood ending, but I think it was still a great movie.