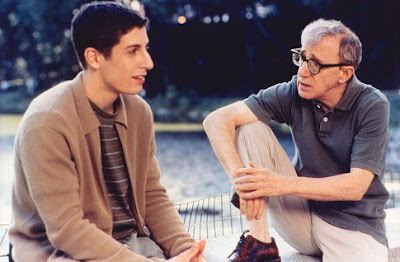 Rotten Tomatoes Synopsis : "Too many elements from better Woody Allen films are being recycled here."

In his review Leonard says: "The filmmaker's all-tome worst movie; you know you're in trouble when it opens with Woody telling a couple of old jokes and even they aren't funny."

There may recycled things in this movie. The Danny DeVito character is like Broadway Danny Rose who only has one client. Woody gives advise to Jerry like Bogart gave advice to him in Play it Again Sam or like Woody gave advice to Tracy in Manhattan or to Annie in Annie Hall. Jerry's non-productive analysis sessions were like Woody's in Annie Hall. Jerry turns and talks to the audience like many of Woody's characters have done.

But the recycled material and corny jokes worked for me. The scenes brought back pleasant remembrances of his earlier films.

When I watch a bad movie, I can't wait for it to end, but I didn't feel like that during this movie. Quentin Tarantino named Anything Else in his top twenty films from 1992 through 2009 (but that does make me question Quentin's taste a little bit).

To me the movie is sort of an inside joke. Woody is counseling a young man who is just like Woody's character in all of his movies, and Woody is trying to convince him to abandon that lifestyle. he is in effect telling his own character self to get on with his life.

Like all of Woody's movies the music in this was great. "The Way You Look Tonight" sung by Billie Holiday alone made the movie worth watching.

Not a great movie, but a nice little Woody Allen comedy which is never a bad thing and certainly not a BOMB.