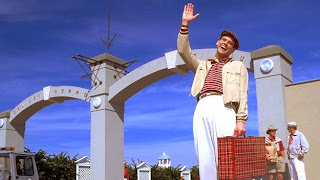 Rotten Tomato Synopsis: "A funny, tender, and thought-provoking film, The Truman Show is all the more noteworthy for its remarkably prescient vision of runaway celebrity culture and a nation with an insatiable thirst for the private details of ordinary lives."

Leonard says in his review : "Satire of our voyeuristic, consumer-driven society scores some points and offers Carrey a change of pace, but after the premise is established it doesn't know where to go. Perhaps that's because it's a short-story idea, not a feature film; The Twilight Zone used to do this thing - better - in half-hour segments."


Wow! That was a pretty vicious review from Leonard. Let's take a look at the Time Out Film Guide review:

"The best comedy since Groundhog Day - better, even, than that - this is more than just a savvy and ingenious satire on media saturation, it's a moving metaphysical fable. One movie you can pronounce a modern classic with absolute confidence."

I wouldn't be so confident if I had just read Leonard's review, and that's what is so disturbing about his rating. There are many people, particularly younger ones, who won't get to see this wonderful movie because Leonard gave it such a mediocre review and rating.

The movie is particularly prophetic about the popularity of reality television. The Real World, Jersey Shore, Big Brother, Survivor are all, for better or worse, really popular. People are fascinated to see how real people will act in a given situation, and there is somehow out there who will make a TV show for them. The Truman Show, and the success of these TV shows has a lot to say American life and culture.

Peter Weir is a wonderful director, and he certainly doesn't deserve his great movie being compared in a disparaging manner to a TV show (although the Twilight Zone shows were great!).

This is a movie that worked for me on many level. It was entertaining; I wanted to see what happened to Truman too. It had great social commentary. It was also very prophetic in pointing out the direction of American television. A movie that has this much going for it deserves a much better review and rating from Leonard.