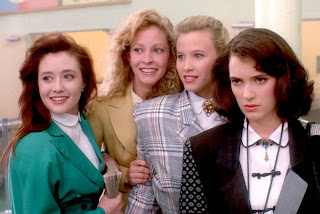 Rotten Tomato Synopsis: "Dark, cynical, and subversive, Heathers gently applies a chainsaw to the conventions of the high school movie -- changing the game for teen comedies to follow.

Leonard says in his review : "Sharp, somewhat smug satire of high school social strata, with Ryder in a terrific performance as a girl who hangs out with the school's bitch-queens but doesn't feel quite comfortable about their reign of terror. Outrageous black humor works at first, but isn't sustained by an uneven script that goes far astray. Slater is commanding in his Jack Nicholsonesque performance. Feature debut for director Lehmann and writer Daniel Waters, with many virtues as well as flaws."


Heather Chandler: "You wanted to be a member of the most powerful clique in school. If I wasn't already the head of it, I'd want the same thing."

Sometimes black comedies are uncomfortable to watch. The Heathers are so cruel that it is tough to watch them leave a path of misery in their wake. Reveling in making the "out crowd" feel bad is what the Heathers are all about. Veronica (Winona Ryder) doesn't enjoy the cruelty, but she does like being in the most popular clique in school.

The new kid J.D. (Chrisitian Slater) isn't impressed by the Heathers but he does impress Veronica. Channeling Jack Nicholson, he is the epitome of cool (just like he would later be in True Romance). When two jocks pick on him in the cafeteria he pulls out a gun and fires blanks at them.

When Veronica rebels a little, Heather number 1 tells her she is out and better transfer. J.D and Veronica visit her the next morning and fix her up a drink that kills her and then they make it look a suicide. When some football players make up rumors about veronica, J.D. knocks them off too.

Veronica dumps the psycho J.D. J.D. teams up with Heather number two, and they start causing some trouble. J.D. eventually plans to blow up the whole school, but Veronica stops him.

The movie is over the top, but is also an intelligent look at the cliques, cruelties, and angst of the teenage years. Disturbing and uncomfortable, Heathers is a really good black comedy.