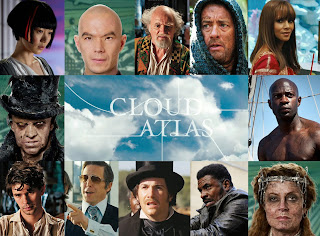 Rotten Tomato Synopsis: Its sprawling, ambitious blend of thought-provoking narrative and eye-catching visuals will prove too unwieldy for some, but the sheer size and scope of Cloud Atlas are all but impossible to ignore.

Leonard says in his review : ""Flawed but wildly ambitious film", and "yet as it reaches its various conclusions it somehow becomes less majestic and more mundane."

This is a movie that really needs to be seen. The critics were really mixed on it, with probably more not liking it than liking it, but I thought it was a wonderful movie. I've seen it three times and can't wait to see it again. I don't claim to fully understand what is going on, but I look forward to getting to know it better.

In his four star review Roger Ebert said: "Even as I was watching "Cloud Atlas" the first time, I knew I would need to see it again. Now that I've seen it the second time, I know I'd like to see it a third time — but I no longer believe repeated viewings will solve anything. To borrow Churchill's description of Russia, "it is a riddle, wrapped in a mystery, inside an enigma." It fascinates in the moment. It's getting from one moment to the next that is tricky.
Surely this is one of the most ambitious films ever made. The little world of film criticism has been alive with interpretations of it, which propose to explain something that lies outside explanation. Any explanation of a work of art must be found in it, not taken to it. As a film teacher, I was always being told by students that a film by David Lynch, say, or Warner Herzog, was "a retelling of the life of Christ, say, or 'Moby Dick.' " My standard reply was: Maybe it's simply the telling of itself."

He goes on to say: "I was never, ever bored by "Cloud Atlas." On my second viewing, I gave up any attempt to work out the logical connections between the segments, stories and characters. What was important was that I set my mind free to play. Clouds do not really look like camels or sailing ships or castles in the sky. They are simply a natural process at work. So too, perhaps, are our lives. Because we have minds and clouds do not, we desire freedom. That is the shape the characters in "Cloud Atlas" take, and how they attempt to direct our thoughts. Any concrete, factual attempt to nail the film down to cold fact, to tell you what it "means," is as pointless as trying to build a clockwork orange.
But, oh, what a film this is! And what a demonstration of the magical, dreamlike qualities of the cinema. And what an opportunity for the actors. And what a leap by the directors, who free themselves from the chains of narrative continuity. And then the wisdom of the old man staring into the flames makes perfect sense."

I think, and I may be wrong, that this is a movie that will gain more acclaim in each passing year. Beautiful, mysterious, exciting and cerebral.