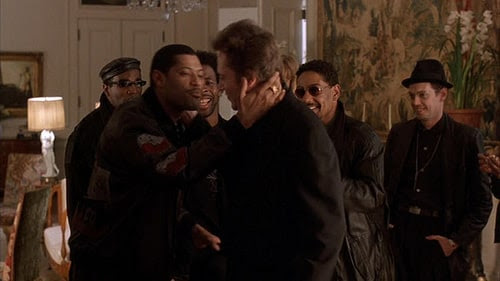 Rotten Tomatoes Rating : 71% with Audience, 78% with the Critics

In his review Leonard says: "Cult director Ferrara offers styl and little more in this ultraviolent outing; one extended monsoon shootout makes this presumably tongue-in-cheek effort worth a glance on a very draggy night."

A strange dystopian twist on the Robin Hood story. Director Abel Ferrara has Christopher Walken cast as Frank White, who has just gotten out of prison. The first thing does is to wipe out an Italian gang that had muscled in on his territory.

Frank then tries to bring in a Chinese gang, to help him with his vision of building a hospital for the poor people of New York. When Lance Wong says he is only interested in the money, his gang is targeted next with a bloody shoot out.

Frank's  merry men party hard as Frank makes plans for his hospital. The police try to make life hard on Frank, but the film makes them out to be just another gang.  It's hard to tell the good guys from the bad guys,

The story is as disjointed as the motives of Frank White. But it is bold, daring and never dull.

Some people will be stunned by how bad they think they think the movie is, while others will be dazzled. I think it is a movie that should be seen so you can decide.