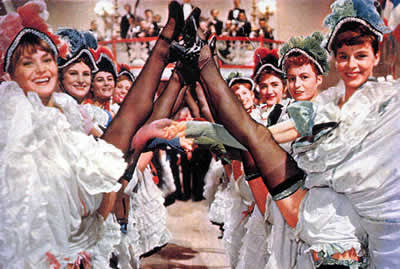 Rotten Tomatoes Rating : 85% with Audience, 100% with the Critics


In his review Leonard says: "Not top-drawer Renoir, but still impressive, enjoyable fiction about the beginnings of the Moulin Rouge and impresario Gabin's creation of the cancan."

Called Only the French Can upon it's release in France, this is fictionalized story of Charles Zidler and the founding of the Moulin Rouge.

The movie opens with Danglard talking to some of his performers backstage. Danglard and some friends then go over to a lower class club, where he dances with a young girl and he thinks he can make her a star. When she does an old dance, the cancan, he begins to get ideas. Nini is only a washer woman, but she can really dance.

Like Renoir's Rules of the Game, we see both the upper and the lower classes. Danglard may be from the upper classes, but the creditors are knocking at his door. Lola, Danglard's beautiful mistress vows to stay with him. But Danglard is not ruled by money or by love, he just wants to have hits at the theater. He says: "Do Ilook like Prince Charming? Only one thing matters to me - what I create."

Danglard goes to the other side of town and finds Nini. He tells her he wants her to dance for him. He then takes her to get trained by an old star of the CanCan.

Danglard somehow manages to buy the White Queen, where he first saw Nini,  He says that he will give them "A taste of the low life for millionaires. Adventure in comfort. Garden tables, the best champagne, great numbers by the finest artistes. The bourgeois will be thrilled to mix with our girls without fear of disease or getting knifed."

It is universally agreed that Jean Renoir was one of the greatest of all directors, and he was also one of the warmest and most entertaining. "Grand Illusion" and "Rules of the Game" are routinely included on lists of the greatest films, and deserve to be. But although "Rules" contains scenes of delightful humor, neither suggest the Renoir who made "Boulu Saved from Drowning" (1932), or "French Cancan" (1954), "French Cancan" a delicious musical comedy that deserves comparison with the golden age Hollywood musicals of the same period.

I thought this movie was so good. I think Roger is right in saying that Renoir is one of the great directors, but I think it was this movie and Boudu Saved from Drowning that help cement his reputation. A great musical and a great comedy help to show how talented he really was,.

One of my favorite things about the movie is that it looks like it could be a homage to Renoir's father. Any frame you freeze looks like an impressionistic painting.

Not as good as Singin in the Rain, but for me, not too far behind. The movie closes with a great twenty minute dance scene.