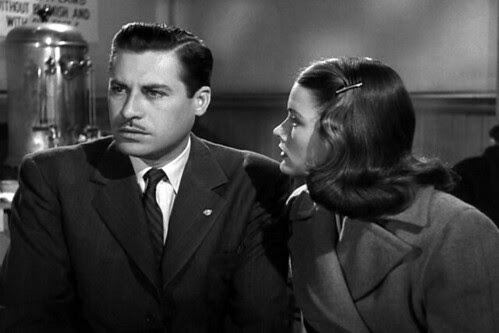 In his review Leonard says: "Satisfactory drama of amnesiac Hodiak trying to discover his true identity and getting mixed up with mobsters and murder; not up to later Mankiewicz efforts."

I think that Leonard really under-rated this really good film noir. George Taylor wakes up in an army hospital with amnesia, and no clue to identity. With a few clues he sets out to find who he is.

When he gets back to L.A. his search leads him to a mystery involving a murder and 2 million dollars in missing Nazi money.

The plot is a little convoluted, but being noir, it almost seems as it should be. Style comes first, and this movie has a lot of style, with the requisite snappy dialogue.

A few of my favorite lines :

She couldn't see, she had her heart in her eyes.

And here was this big chunk of dough floating around loose in this country, like a pair of dice at a fireman's ball.

In about two minutes, a bouncer is coming back in here with no sense of humor. He's a foot bigger than you in all directions. That's what I think.

If it's insurance I'll take a little on him, double indemnity.
What's that mean?
It means if I beat your brains in I get paid double.

You have my word he will not molest you. A mere figure of speech. My word is worthless.

There's some sandwiches over there with their toes curled up.

Their both in the kitchen. He and Adolf Hitler. You'll get promoted for this lieutenant.

Don't hold on to me. That way we're one target.

And whose the character with the hair?
This is a Miss Smith.
I get it.
If it's around I'm sure you will.

Well if I could only learn how to shoot straight I might save the taxpayers some dough, but I always close my eyes.

How could a movie with quotes like that be only 2 1/2 stars. A really good movie, well worth seeing by the great Joseph Mankiewicz.