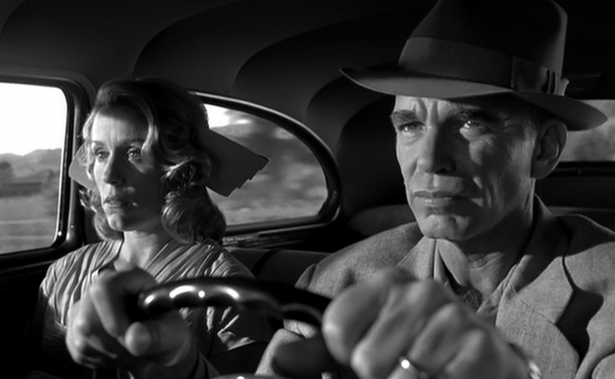 Critics Consensus: "Stylish but emotionally distant, The Man Who Wasn't There is a clever tribute to the film noir genre."

In his review Leonard says: "Exquisitely detailed b&w homage to film noir, and James M. Cain in particular, set in the 1940's. Thorton gives a striking performance as a taciturn small-town barber who gets involved in a crime that snowballs out of control. Unfortunately, the script takes one of those Coen Brothers left turns, changes gears, and goes on much longer than it should."


Leonard doesn't seem to like the Coen brother's ventures in to the film noir world. He gave 2 1/2 stars to Miller's Crossing, The Big Lebowski and to The Man Who Wasn't There.


The movie opens with the camera focused on a barber's pole and the names of the actors come on the screen and their shadows are cast on the swirling stripes of the pole. The movie was shot in color and then transferred to black and white. Roger Deakins was nominated for an Academy Award for his cinematography.

The movie starts with a voice over: "Yeah I worked in a barber shop, but I never considered myself a barber." Ed Crane (Billy Bob Thorton) had married in to the trade, and didn't own the business. We can tell in the first few minutes of the film that this is noir and that Ed is going to be in big trouble.

Ed's wife is Doris (Frances McDormand) and they have her boss, Big Dave Brewster (James Gandolfini) and his wife over for dinner. Doris laughs at all of Big Dave's jokes.

When a customer, Creighton Tolliver,  tells Ed about a new process, dry cleaning, that he could make a fortune with if he can get some money. Ed later goes to Creighton and tells him he can get a hold of the $10,000.

Ed writes an anonymous blackmail note to Big Dave threatening to tell what he know about the affair Big Dave was having with Doris. He asks for $10,000.

Big Dave follows the instructions and makes the payoff. Ed now has the money to give to Creighton to become a partner in his new dry cleaning business.

When Big Dave finds out it was Ed who set him up, he confronts him and then beats him up. As he is being choked to death, Ed stabs Big Dave in the neck and kills him.

Detectives then show up at the barber shop and tell Ed that his wife has been arrested for the death of Big Dave and for cooking the books for Big Dave's business. Ed helps to hire a lawyer to defend his wife. Ed then admits to the lawyer and his wife that he killed Big Dave. The lawyer doesn't believe Ed, but Doris does.

The movie moves a long at a very leisurely pace. It has been criticized by some critics, including Leonard, for taking too long to tell it's story, but I think it was just wonderful. I would have enjoyed this movie if it was twice as long. It definitely isn't a movie where i looked at my watch, wondering when it was going to end. I enjoyed every minute of it.

It wasn't just a movie that was paying homage to film noir, it was a beautifully crafted film noir made in 2001.