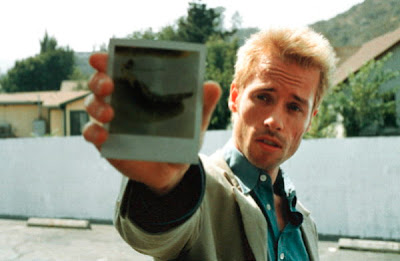 
Leonard says in his review : "Pretentious pap plays with storytelling conventions and juggles 'real time', but adds up to zero (though the film has many ardent fans)".


If most people think one way about a movie and Mr. Maltin thinks another, and he gives his view very strongly, who is being pretentious?

Memento is a very disturbing neo-noir movie. We sempathasize with Leonard as he struggles to find out what happened. The movie, like all good noir is unsettling. The cuts and jumps keep us unsettled as the movie brings us close to Leonard's world view.

Does Mr. Maltin really think that people should not see this inventive, exciting and challenging movie? When the ratings from everyone else (critics and fans) are so high, maybe it's time to realize that he is the one who is mistaken. Giving this film such a low rating helps discourage people who are trying to be creative and do new things with cinema. A very, very disappointing rating and review.

A great movie that should be sampled by all.