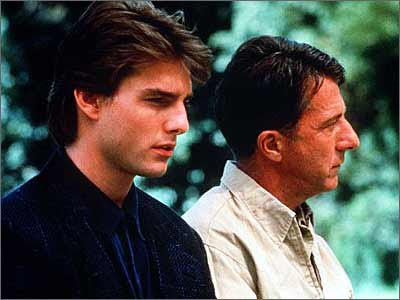 Rotten Tomatoes Consensus : "This road-trip movie about an autistic savant and his callow brother is far from seamless, but Barry Levinson's direction is impressive, and strong performances from Tom Cruise and Dustin Hoffman add to its appeal."

Dustin Hoffman's iconic performance alone, makes this a 4 star movie. Besides the performances there are just so many other things that make the movie special. The look in to the world of an idiot savant, the growth in Charlie Babbit's character and the problems presented with dealing with those who are different.

Leonard says in his review : ""Top-drawer performances from Hoffman, as the idiot savant, and Cruise, as his selfish sibling, make this a must-see, even though the story meanders and becomes predictable."

The movie never meanders or becomes predictable for me. This is a movie I can turn on at any time, to any part and sit down and watch. Quantas, K-Mart, Judge Wapner, Who's on first? How often do you remember the little details of a movie?