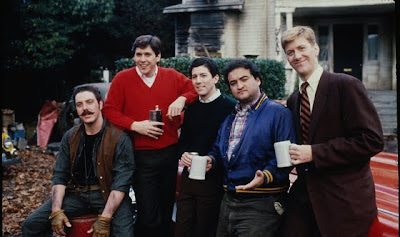 Rotten Tomatoes Synopsis : "ANIMAL HOUSE is the film that launched National Lampoon as a comedy powerhouse. Developed by the editors at the Harvard Lampoon, the film is a collection of true-life experiences and memories with a great deal of embellishment. Nothing is sacred in this film, in which every gesture, phrase, and song became de rigueur in fraternity houses nationwide after its release. "


Animal House is one of those once in a decade movies that is cheap, crass and should be very forgettable, but isn't. The high ratings on IMDB and Rotten Tomatoes attest to its popularity with fans and critics. Mr. Maltin's review says : "Spoof of early 1960s college life is only sporadically funny, depends largely on Belushi mugging as a frat-house animal. Not nearly as roisterous or amusing as any issue of the Lampoon."

"Fat, drunk and stupid is no way to go through life, son."

"Now we could do it with conventional weapons that could take years and cost millions of lives. No, I think we have to go all out. I think that this situation absolutely requires a really futile and stupid gesture be done on somebody's part."

"Seven years of college down the drain."

"We have an old saying in Delta House: don't get mad, get even."

"Well, as of this moment, they're on DOUBLE SECRET PROBATION!"

It's hard to believe that someone who has seen the movie, and has heard all those great iconic lines above, thinks that an issue of Lapoon is more amusing than this movie.