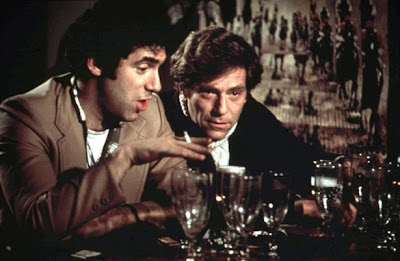 Rotten Tomatoes Synopsis : "This narratively-loose comedy uses the real inhabitants of the gambling underworld as characters, and the final product is an episodic construction of random occurrences that are by turns trivial, weighty, and amusing. This impression of disconnection is underscored by director Robert Altman's characteristically layered, rich sound, which creates a chaotic and authentic feel. Segal and Gould turn in believable performances as reckless compulsive gamblers whose thirst to win takes them all the way to the poker table of the legendary champion Amarillo Slim. "


I really enjoyed this Robert Altman film. I think it was one of the best gambling movies ever made and a great buddy movie too.

This movie works so well as both a comedy and drama. It never feels choppy. It’s like MASH, from pure comedy to pure tragedy and it’s done so smoothly. I have to admit that I don’t usually like movies that don’t know if they are comedies or drama. It is so hard to do that most directors that try it just can’t pull it off. I think Altman does it better than anyone.

Leonard said in his review : "Realistic but rambling look at two compulsive gamblers, their strange lifestyles, and the emptiness of winning. Altman's multi-channel soundtrack only adds to the muddle."

No one handles rambling and muddling like Altman. This  is another gem from the master.