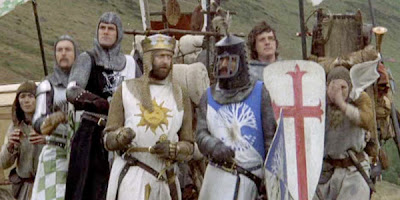 Rotten Tomatoes Consensus : " A cult classic as gut-bustingly hilarious as it is blithely ridiculous, Monty Python and the Holy Grail has lost none of its exceedingly silly charm."


Leonard says in his review : "The Python troupe's second feature is wildly uneven, starting out well and getting lost in the 'story' of a medieval quest." He goes on to say : "Recommended for fans only."

Wow! "Recommended for fans only"! I'm not a Python fan, don't really like slapstick too much, but I am a big fan of this movie. What a shame that so many people will not see this great movie because of the really rotten review in Leonard's book.

"Please! This is supposed to be a happy occasion. Let's not bicker and argue over who killed who."
"It's just a flesh wound."
"Well, she turned me into a newt!"
"You've got two empty halves of coconut and you're bangin' 'em together."
"Yes, shrubberies are my trade. I am a shrubber. My name is Roger the Shrubber. I arrange, design, and sell shrubberies."
"We are now no longer the Knights who say Ni."
"No you're not, you'll be stone dead in a moment"
"Look, that rabbit's got a vicious streak a mile wide! It's a killer!"

I don't often laugh out loud when I watch a movie, but this is one movie that really gets to me. 2 1/2 stars! What a shame!