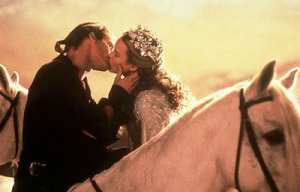 Rotten Tomatoes Synopsis : "Director Rob Reiner breathes vividly colored cinematic life into William Goldman's THE PRINCESS BRIDE, effectively evoking the wondrous, wide-eyed spirit of the witty 1973 novel. A clever fairy tale for all ages, THE PRINCESS BRIDE is arguably one of the funniest and most entertaining films of all time. "


Leonard says in his review : "Some wonderful scenes and character vignettes are periodically undermined by a tendency towards comic shtick (as in Crystal's cameo) and occasional incoherencey."


I can't believe Leonard thought the shtick undermined this movie, I thought it was what made it special. Great writing, great acting and great dialogue. I think I will let the movie speak for itself.


"Death cannot stop true love. All it can do is delay it for a while."

"You rush a miracle man, you get rotten miracles."

"I do not mean to pry, but you don't by any chance happen to have six fingers on your right hand?"

"Hello, my name is Inigo Montoya. You killed my father. Prepare to die."

Prince Humperdinck: Tyrone, you know how much I love watching you work, but I’ve got my country’s 500th anniversary to plan, my wedding to arrange, my wife to murder and Guilder to frame for it; I’m swamped.
Count Rugen: Get some rest. If you haven’t got your health, then you haven’t got anything.

In his 3 1/2 star review Roger Ebert said: "The Princess Bride was adapted by William Goldman from his own novel, which he says was inspired by a book he read as a child, but which seems to have been cheerfully transformed by his wicked adult imagination. It is filled with good-hearted fun, with performances by actors who seem to be smacking their lips and by a certain true innocence that survives all of Reiner's satire. And, also, it does have kissing in it."

This is a movie that revels in its comic shtick and in its incoherency. It is a movie that has one wonderful scene after another, and they don't necessarily make sense, but then again it is a fairy tale. It is supposed to be entertaining not logical, and entertaining it most certainly is.

Even if you have never seen the movie, just from reading some of the quotes listed above you can tell that this is not your ordinary mediocre 2 1/2 star movie that deserves to be ignored.

The Princess Bride is a delightful, entertaining movie that needs to be seen by all and like all great movies, it gets better with each viewing,