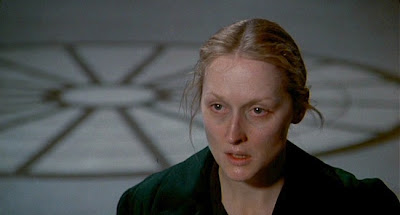 Rotten Tomatoes Synopsis : The film culminates in a flashback reflecting the horrors of the war and the true cause of Sophie's insufferable pain. Director Alan J. Pakula's film, a departure from his conspiracy and suspense dramas, was an adaptation of William Styron's best-selling novel and the story itself was based on his experiences as a southerner living in Brooklyn in 1947


Leonard says in his review : "Streep's Oscar-winning performances is the centerpiece for this slavishly faithful, but deadening slow-moving, adaption .." He goes on to say : "Nestor Almendros' camera is in love with Streep but her stunning characterization can't carry the film alone."

I totally disagree that the movie isn't worth seeing  just for Meryl Streep's performance alone. America's best actress, in what was probably her best role - well worth seeing.

I also think that Kevin Kline was great in this movie. I also never thought the movie was slow. I loved the experience of watching the movie slowly reveal the mysteries of Sophie's tragic life.

A great movie with tremendous acting that unfolded like a mystery.