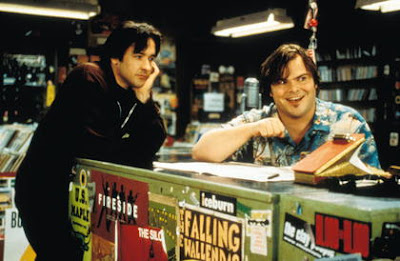 Rotten Tomatoes Consensus : The deft hand of director Stephen Frears and strong performances by the ensemble cast combine to tell an entertaining story with a rock-solid soundtrack.


Leonard said in his review : "Hornby's novel is alternately insightful and annoying, embodied by Cusack's direct-to-camera chats and the fanatically detailed depiction of the music scene and its inhabitants."


This is a movie that has a lot going for it - it's funny, it's insightful and it has great music. It also works as a romance.

Rob Gordan, as played by Jon Cusack, is a great character. He is strange, quirky and obsessive and everyone knows someone who was like him when they were growing up. Rob's sidekicks at the record store, Dick and Barry (Jack Black) are also really good characters who come to work every day, even though they only get paid for three.

In its unforced, whimsical, quirky, obsessive way, "High Fidelity" is a comedy about real people in real lives. The movie looks like it was easy to make--but it must not have been because movies this wry and likable hardly ever get made. Usually a clunky plot gets in the way, or the filmmakers are afraid to let their characters seem too smart. Watching "High Fidelity," I had the feeling I could walk out of the theater and meet the same people on the street--and want to, which is an even higher compliment.

This movie is so much better than all those teen comedies that keep coming out and it is a movie that gets better with each viewing.