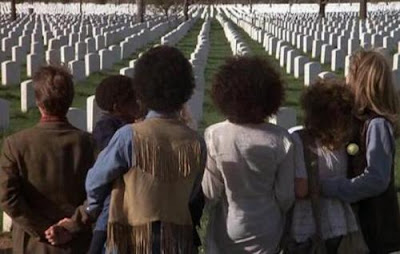 
Leonard said in his review : "Unfortunately, it's now a period piece and its impact considerably muffled."

I'm not too big on musicals, outside of Singin' in the Rain, which is one of my favorite movies, but I really, really liked this movie.

I walked into Hair with the gravest doubts that this artifact of 1960s social shock would transfer to our current, sleepier times. In the 1960s we went to angry musicals; now we line up for "La Cage aux Folles." My doubts disappeared with the surge and bold authority of the first musical statement: This is the dawning of the Age of Aquarius!

So maybe it isn't, really, and maybe the sun set on that particular age back around the time they pinched the Watergate burglars. But Milos Forman's "Hair" opens with such confidence and joy, moves so swiftly and sustains itself so well that I wonder why I had any doubts. "Hair" is, amazingly, not a period piece but a freshly conceived and staged memory of the tribulations of the mid-sixties.

It is also a terrific musical. The songs, of course, were good to begin with: The glory of "Hair" and "Let the Sun Shine In" and "Age of Aquarius" and the sly, silly warmth of "Black Boys/White Boys." But to the original music, the film version adds a story that works well with it, airy and open photography, and glorious choreography by Twyla Tharp. This film had great music and it helps give a sense of what the 60's were like, which should be really interesting to people who didn't live through it.

I really don't think the great music in this movie will be muffled by time. Good movies and music don't have expiration dates. And how many other good movies about hippies are there out there?

For some reason Leonard doesn't have much love for the great director Milos Foreman. He also had sub par reviews for Amadeus (1984) and The Firemen's Ball (1967).