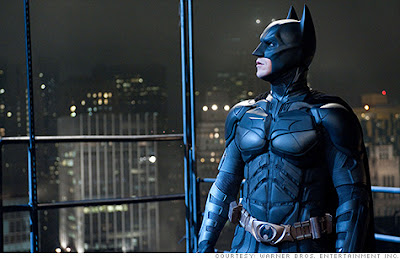 Rotten Tomatoes Consensus : Dark, complex and unforgettable, The Dark Knight succeeds not just as an entertaining comic book film, but as a richly thrilling crime saga.


Leonard says in his online review : "I guess I take movies too seriously; I always have. I cry easily and wince at any explosive action. As for violence and horror, my wife’s arm is still black and blue from my grabbing her repeatedly during the last scary movie we saw. This is why I have no taste for the current run of slasher/torture movies. While young people treat them as a kind of joke, I can’t remain aloof enough to enjoy them. Yes, I know the difference between cartoonish or outlandish violence—as practiced by Quentin Tarantino in Kill Bill, for instance—and the kind that’s supposed to hurt. But when a movie asks me to become emotionally involved and then plays with my feelings, I have problems. That’s why I didn’t enjoy The Dark Knight. I was especially disappointed because I thought Christopher Nolan did such a fine job with Batman Begins, which recreated the caped crusader’s origins with a deft mixture of drama, fantasy, and humor. The Dark Knight is unrelentingly dark; the only moments of lightness are provided—all too briefly—by Michael Caine as Alfred the butler. The centerpiece of the film is Heath Ledger’s extraordinary performance as The Joker. While I appreciated his work as an actor, the character he portrays is so thoroughly sick and twisted that I could derive no pleasure from watching him. (I’m sure the awareness of his untimely death hovered in my consciousness, as well.) When this famous character’s antics cease to be portrayed in comic-book terms and become tangibly, frighteningly real, the playing field has clearly changed. It’s all a matter of tone, the single most crucial element in a film that tries to straddle the juvenile world of superhero storytelling and a more challenging, adult brand of drama. It seems that Nolan and his writing collaborators (David S. Goyer and his brother Jonathan Nolan) want to make a statement about the post-9/11 world. The script drives home the belief that one should never negotiate with terrorists, a fateful reminder of contemporary geopolitics...but how does one reconcile that somber worldview with the goal of creating entertainment? Nolan pulled it off in his previous Batman film, as Sam Raimi did in Spider-man 2, but it’s a mighty challenge. All I know is that I didn’t have any fun at all watching the most anticipated film of the summer.


Mr. Maltin, some people like their movies dark. Check the IMDB rating, Rotten Tomatoes percentage and the RT Consensus listed above.

Your ratings should take in to account the audience's taste too. Your book is supposed to tell people whether or not they will enjoy a particular movie. It is not supposed to be about your feelings for a particular director. You should probably excuse yourself from writing reviews of any more Christopher Nolan movies.

An exciting, well written, well acted super hero movie that I (and almost everyone else) really enjoyed seeing.