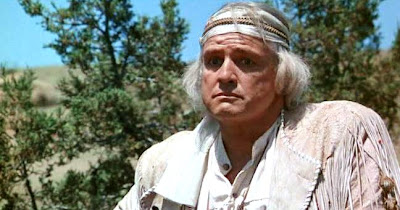 Rotten Tomatoes Synopsis : THE MISSOURI BREAKS is another vivid anti-western from Penn. Like LITTLE BIG MAN, this film takes a hard look at what life was like in the wild West, keeping the characters real and the story intense. Marlon Brando gives an unnerving performance as the insane bounty hunter, and Nicholson is sympathetic as the young but wearied cattle rustler who is in love with his enemy's daughter. The production overcame many difficulties with weather and locations to create an entertaining Hollywood epic.


Leonard says in his review : "Jumbled, excessively violent. pseudo-event; a great director's worst film and one of the worst 'big' movies ever made."
This is a movie that I have always loved. I would have enjoyed this movie just to see Brando and Nicholson work together, even if the movie was no good, but I think that this is an under appreciated masterpiece.

Before Unforgiven, this great movie pointed out what the West was really like. This movie takes things to a different level as Penn tries to debunk the Western myths. But it is Brando who really owns this movie. He was a loose cannon, but I think the results that sprang from the chaos on the set  and on to the screen are wonderful.

The Harvard Film Archive at a recent showing had this synopsis : "Featuring the incredible pairing of Jack Nicholson as a feckless cattle thief and Marlon Brando as the Irish 'regulator' hired to hunt him down, The Missouri Breaks is a rollicking and highly unusual Western that, in typical Penn fashion, strains the boundaries of the genre. Penn's empowerment of performers is taken to a wonderful furthest extreme by the subversive presence of Brando's cross-dressing and unpredictable assassin, who effectively turns codes of masculinity and narrative continuity upon their heads. Once dismissed as an 'oddity' in Penn's career, The Missouri Breaks has been reevaluated as one of the more ambitious and original Westerns of its time, placing it in the company of Peter Fonda's The Hired Hand and Monte Hellman's The Shooting."
A revisionist review of a revisionist Western. I think that this is a movie that is going to become very popular in the next couple of decades.