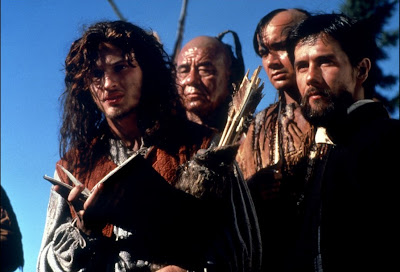 Rotten Tomatoes Synopsis : Director Bruce Beresford's abiding fascination with the clash of cultures is apparent in this adaptation of Brian Moore's novel of a Jesuit missionary who leaves France in 1634 to bring the word of Jesus to the Huron tribe of rugged northern Quebec. The film, which stars Lothaire Bluteau as LaForgue, casts aside the revisionist notion of the Native American as an enlightened being, superior to Caucasian interlopers, depicting the Huron world as one of ugliness and harshness. Bluteau is excellent in this bleak film, which includes some of the most meticulously researched representations of Native American life ever put on film


Leonard says in his review : "Director Beresford travels much the same territory as Dances with Wolves, but paints a much bleaker picture. Beautifully photographed but graphically violent, this flawed, fascinating film is for demanding viewers."
I think when Leonard says that the movie is for demanding viewers, it is sort of a code saying it is only for intelligent viewers. This film is probably the most realistic movie ever made about the early colonial period on this continent. It strips away all the varnish from the 'noble savage' presentation of Native American culture (actually doing just the opposite of what Dancing with Wolves did). But not all the representations were negative. There are widely different portrayals of tribes in Black Robe. The Hurons and Algonquins are portrayed in a favorable light with strong cultures and strong values. The Iroqouis are represented in a more savage manner. This is a movie that stands up very well in a comparison to Dances with Wolves, which is a movie I also like very much. However, in Black Robe a white man is not riding in like Tarzan to save the day for the poor Indians. This is a very truthful movie. Dark and dreary but ultimately, very rewarding.
I don't think that movies that are geared for an intelligent audience should be penalized in its rating. Just add a comment, like Leonard did, that the movie is for demanding viewers.