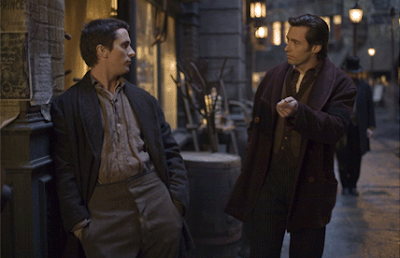 Rotten Tomatoes Consensus : Full of twists and turns, The Prestige is a dazzling period piece that never stops challenging the audience.

Leonard says in his review : "Airless, cheerless story of two magicians in London and how their rivalry develops into an unhealthy obsession. Somehow Nolan has managed to make a film about magic and illusion without a sense of wonder - or a drop of humor."

Christopher Nolam made a wonderful movie, and Leonard was disappointed that it didn't have some comedy. The movie paints a beautiful picture of two rival Victorian magicians. This was a pretty dark movie but just because it is about magicians doesn't mean it should be bright and airy.

A story about mystery and magic, it is beautifully filmed and wonderfully acted by Christian Bale, Hugh Jackman and Michael Caine. To me the ending was a little contrived, but this is still a movie that is definitely worth seeing.

Looking at the Rotten Tomatoes and IMDB rating it is pretty ridiculous to give a two star review to a movie so loved. The Movie Guide is supposed to tell the reader whether they will enjoy the movie, and for this film the rating and review fail miserably.