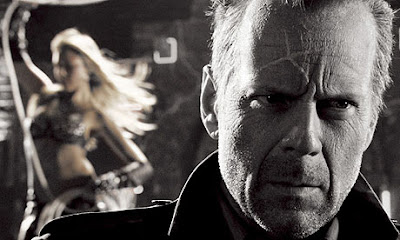 
Leonard says in his review : "Stylish, audacious, but completely artificial; the initial excitement of watching these images soon dies off but the film refuses to do the same. Miller fans and adolescent boys will probably rate this much higher."
The acting in this film was really good. Bruce Willis, Clive Owen, Mickey Rourke, Jessica Elba, Elijah Wood all shined in this comic book adaption.

Roger Ebert said in his 4 star review : "If film noir was not a genre, but a hard man on mean streets with a lost lovely in his heart and a gat in his gut, his nightmares would look like Sin City."

Roger must be a Frank Miller fan, because he liked it even more than I did, and neither of us are adolescents.

Dark, creepy, disturbing , strange and fascinating. Not for all tastes, but very well done.