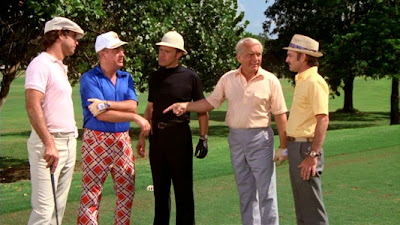 Leonard says in his review : "Animal House-type hijinks at a posh country club; another comedy where irreverence and destruction are a substitute for humor."
The movie really doesn't have a cohesive plot, but like the Marx Brothers and W.C. Fields movies there is a joke a minute.

Al Czervik: Oh, this your wife, huh? A lovely lady. Hey baby, you must’ve been something before electricity.

Carl Spackler: So I jump ship in Hong Kong and make my way over to Tibet, and I get on as a looper at a course over in the Himalayas. A looper, you know, a caddy, a looper, a jock. So, I tell them I’m a pro jock, and who do you think they give me? The Dalai Lama, himself. Twelfth son of the Lama. The flowing robes, the grace, bald… striking. So, I’m on the first tee with him. I give him the driver. He hauls off and whacks one – big hitter, the Lama – long, into a ten-thousand foot crevasse, right at the base of this glacier. Do you know what the Lama says? Gunga galunga… gunga, gunga-galunga. So we finish the eighteenth and he’s gonna stiff me. And I say, “Hey, Lama, hey, how about a little something, you know, for the effort, you know.” And he says, “Oh, uh, there won’t be any money, but when you die, on your deathbed, you will receive total consciousness.” So I got that goin’ for me, which is nice.

Carl Spackler: This crowd has gone deadly silent, a Cinderella story outta nowhere. Former greenskeeper and now about to become the masters champion.

People who play golf should add another 1/2 star.