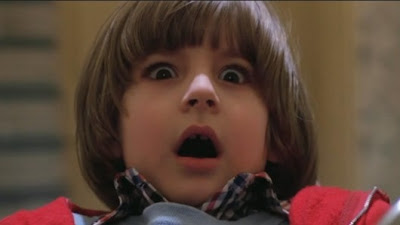 Rotten Tomatoes Synopsis : "Nicholson and Duvall are outstanding throughout, with both actors running the full gamut of human emotions as the film races towards a thrilling conclusion. Supplemented by an oddball cast of dead twin girls, suicidal ax-murdering ghosts, Scatman Crothers as the hotel cook, and many other weird and wonderful figures, Kubrick's film is a pulse-racing treat that is among the best in his inimitable body of work."


Horror is not one of my favorite genres, but this movie is without a doubt , one of the best horror/suspense films ever made. IMDB has it as the 48th highest ranked movie. Maybe people should be advised to see this movie (since everyone else loves it!).

Leonard says : "Intriguing but ineffectual adaption of Stephen King's thriller ...". He goes on to say : "Nicholson goes off the wall so quickly there's no time to get involved in his plight. Some eerie scenes, to be sure, but the film goes on forever."

Leonard wanted more character development for Jack, but he also complains movie goes on too long. I think most people think movie is just perfect the way it is.