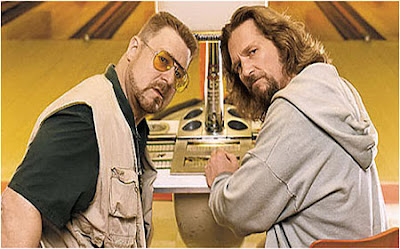 Rotten Tomatoes Consensus : "Typically stunning visuals and sharp dialogue from the Coen Brothers, brought to life with strong performances from Goodman and Bridges."


"This rating will not stand!"

A movie guide is supposed to tell people whether they will like a movie and this movie has an IMDB rating of 8.2, so most people will probably like it, and its rating should be much higher than the 2 1/2 stars Leonard gave it.

He says in his review : "One big, shaggy-dog joke, courtesy of the Coen brothers, about a slacker who's mistaken for a crime bigwig of the same name - and then gets hired by the guy to pay off a ransom. Mostly an excuse for off-the-wall character vignettes, some of which are amusing, some of which are just ... strange. Minor Coen concoction with a most agreeable cast."

Well Leonard, the Dude is not mistaken for a crime bigwig. The Big Lebowski is a millionaire businessman who has achieved great things in his life. If you are going to write a three line review at least get the facts straight.

I have a big problem with this review. The movie really wasn't just "an excuse for off-the-wall character vignettes", it was a parody and an homage to film noir, and in particular to Raymond Chandler's The Big Sleep. If the movie is disjointed, episodic and "strange", so was the classic movie that it is paying homage to.

"The Dude", along with Eliot Gould's Marlowe in The Long Goodbye, is a Marlowe for a different time.

In his Great Movie review the great Roger Ebert (Roger originally gave it 3 stars in 1998 but by 2010 added it as one of his movie greats) said:

The inspiration for the supporting characters can perhaps be found in the novels of Raymond Chandler. The Southern California setting, the millionaire, the kidnapped wife, the bohemian daughter, the enforcers, the cops who know the hero by name, can all be found in Chandler. The Dude is in a sense Philip Marlowe -- not in his energy or focus, but in the code he lives by. Down these mean streets walks a man who won't allow his rug to be pissed on. "That will not stand," he says, perhaps unconsciously quoting George H.W. Bush about Saddam's invasion of Kuwait. The Dude does not lie, steal or cheat. He does swear. He wants what is right. With the earliest flags of the republic, he insists, "Don't tread on me."

Great dialogue, a great commentary on our times and a great bowling movie. "The Dude abides. I don't know about you but I take comfort in that. It's good knowin' he's out there. The Dude. Takin' 'er easy for all us sinners. Shoosh. I sure hope he makes the finals."