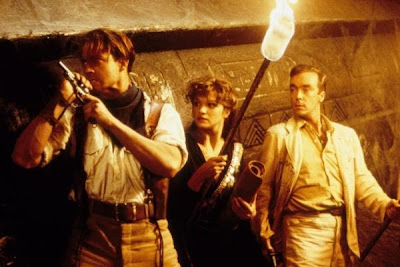 Only 55% of the critics likes The Mummy at Rotten Tomatoes, so Leonard wasn't only in thinking it was mediocre. In his review he said: "Special effects galore, but no sense of awe or wonder; what's more, it goes on forever."

This was a movie that tried to recreate the fell and success of the Indiana Jones movies, and couldn't quite reach that level, but then again who could? Not a bad movie by any means. Maybe it's just me, but put anything about ancient Egypt on the screen and I'm hooked.

Brendan Fraser was good in the lead role of an American adventurer in 1926 Cairo who gets involved in the hunt for buried treasure.

Not a great movie by any standard, but I think it us good, light entertainment, and that there is an audience for it. I think it should be very popular with younger audiences. I think it is much better than the 1 1/2 starts Leonard gave it in his Movie Guide.