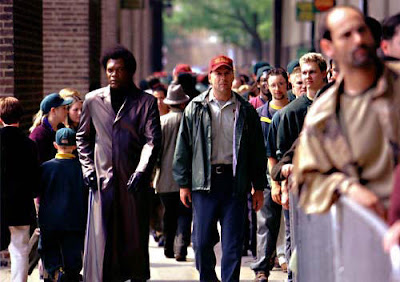 Rotten Tomatoes Synopsis: "With a weaker ending, Unbreakable is not as a good as The Sixth Sense. However, it is a quietly suspenseful film that intrigues and engages, taking the audience through unpredictable twists and turns along the way."

Leonard says in his review: ".. is like a shaggy dog joke that doesn't seem worth the effort once you've seen the punchline."

The movie opens with the birth of Elijah in 1961 in a Philadelphia Department store. Elijah is born with broken arms and legs. David Dunn is a creepy sort of a guy who takes his wedding ring off when he meets a pretty girl on a train. David (Bruce Willis) is the only survivor of a horrific traffic accident that kills 131 people. He comes out a little dazed, but without a scratch. David gets a note asking him if he has ever been sick, and when he checks his sick days, he finds he hasn't ever taken one. He also doesn't remember ever being sick in his life.

David meets Elijah Price (Samuel Jackson) and David begins to wonder about himself, and we wonder along with him.

An original mystery thriller that needs to be seen more then once. The ending may not be as good as the story leading up to it, but I still really enjoyed this fine film.