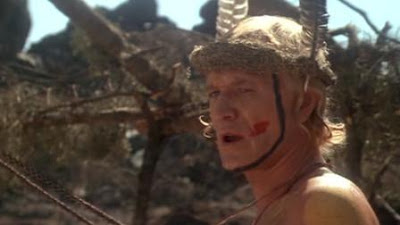 In his review Leonard says: "Excellent sequel has has Harris returning from England to right wrongs done the Yellow Hands Sioux by the whites."

The first movie, A Man Called Horse was pretty good. It had the Sioux speaking their own language and it showed how the Indians lived. It also showed the Sun Ceremony which was practiced by many of the Plains tribes. John Morgan comes to appreciate the lifestyle and culture of the Sioux Indians.

In Return of a Man Called Horse almost everything that was good in the first movie is done badly here. The Indians suddenly all speak English. Gale Sondergaard is badly miscast as Elk Woman. The Sioux instead of being portrayed as a proud, strong culture are now portrayed as weak, defeated losers.

The worse thing about the movie is that it suffers from the Tarzan syndrome. Put a white man in the midst of natives and he will quickly emerge as the best of them all. When John Morgan left the Yellow Hand they quickly deteriorated without this leadership.

Morgan returns from England to again save the tribe. It is up to a man called Horse to teach the Indians how to be Sioux again and regain their pride. Give the white guy a few men, some women and some children and he can defeat a whole tribe of Arikara's and their trader friends.

Racist and poorly written, this movie is a poor imitation of the original.