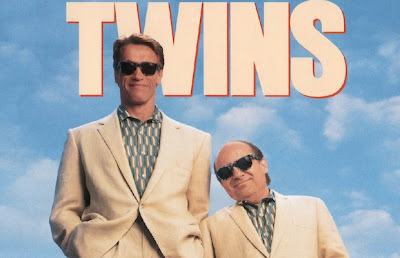 I understand that people have different senses of humor, and I also understand that some people probably thought that this movie was funny, but I was not one of them. This was one of those movies that seemed to go on for four hours. It just wouldn't end.

Poorly written with no real story line beyond the initial joke. Arnold is actually pretty good, and there is one funny scene where he compares his muscles to Stallone in a Rambo poster.

What really irritates me about Leonard's three star rating is that it is the same as the rating Leonard gave Rain Man, which is also about two brothers. But Rain Man is funny, dramatic, entertaining and really well written, everything that Twins is not.

Believe it or not a sequel is planned called Triplets, with Eddie Murphy as the newly discovered third brother. I'm not kidding. Look it up on IMDB. Leonard will probably like this one too.