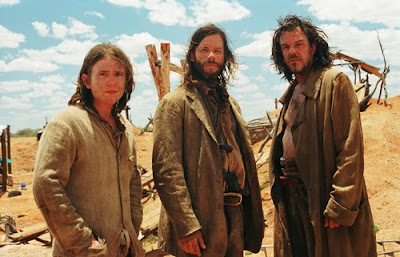 Rotten Tomatoes Synopsis :Brutal, unflinching, and violent, but thought-provoking and with excellent performances, this Australian western is the one of the best examples of the genre to come along in recent times.

In his review Leonard says: "Austere, violent, and relentlessly harsh, like the time and place it portrays. Nick Cave's screenplay challenges the viewer to find humanity amidst the sturm and drang; it ain't easy."

The story centers around three criminal brothers and the lawmen who is determined to bring one of them to justice. The lawman (Ray Winstone) makes a proposition to one of the brothers, Charlie Burns (Guy Pearce). If he brings he his psychopathic brother Arthur, then he can set his younger brother free.

In his four star review Roger Ebert says: "The Proposition plays like a Western moved from Colorado to Hell. The characters are familiar: The desperado brothers, the zealous lawman, his civilized wife, the corrupt mayor, the old coots, the resentful natives. But the setting is the Outback of Australia as I have never seen it before. These spaces don't seem wide open because an oppressive sky glares down at the sullen earth; this world is sun-baked, hostile, unforgiving, and it breeds heartless men."

Leonard's two star rating is going to discourage many potential viewers from seeing this excellent movie.