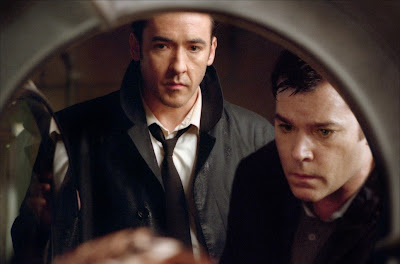 Rotten Tomatoes Consensus : Identity is a film that will divide audiences -- the twists of its plot will either impress or exasperate you.

In his review Leonard says: "Means to be clever but at its core is a harsh, unrelenting ugly rip-off of Agatha Christie's Ten Little Indians. Also hampered by cliched characters and some truly dumb dialogue."

I am not a fan of horror movies and I am not a fan of movies that manipulate me, but I did enjoy this movie. The movie had a good cast and I have to admit I had no idea what was going on while I was watching it.

Like Memento and The Usual Suspects, this is a movie that takes pleasure in tricking you. I agree with the Rotten Tomatoes consensus: it is a film that will either impress or exasperate you.

However, I think there are a lot more people who will like this movie, then will be exasperated. I also like the homage to Ten Little Indians and don't feel it was a rip-off.

Not my favorite genre or style of movie, but it does deserve a much higher rating then the 1 1/2 stars Leonard gave it. This is a movie that has the potential to be a favorite movie of some people who might not see it because of his rating.