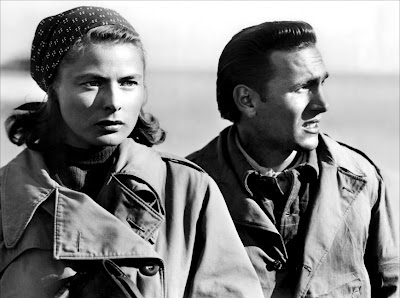 Karin (Ingrid Bergman) is a war refugee from Lithuania, who had taken up with an invading officer, and now marries Antonio to escape an internment camp. They go to the island of Stromboli and Antonio picks up his life as a fisherman, but Karin, the outsider, doesn't seem to fit in.

Antonio works really hard on the boats but the locals see Karin flirting with a young man and he becomes miserable. Karin is further isolated by the locals, particularly by the women.

There are some great documentary style scenes of the fishing boats working together to net tuna. On the sea the villagers all work together. When the volcano starts erupting everyone heads for their boats and follow the priest as he leads them in prayer.

Karin feels trapped and decides she must get away. Antonio locks her up but she escapes and heads for the other side of the island past the volcano she fears so badly.

A really interesting movie from the great master.

This old mountain it´s been waiting
All ist life for you to work it
For your hand to touch the hardrock,
Ingrid Bergman, Ingrid Bergman

If you´ll walk across my camera,
I will flash the world your story,
I will pay you more than money, Ingrid Bergman

Not by pennies dimes nor quarters,
But with happy sons and daughters,
And they´ll sing around Stromboli,
Ingrid Bergman