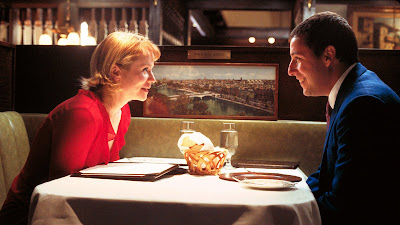 Leonard says in his review: "Anderson's cockeyed, fairy-tale version of a romantic comedy is extremely strange, off-putting, and weird for the sake of being weird .."

Punch-Drunk Love is one of those movies that you are probably going to love, or hate. It all depends on whether you buy in to it. The movie is strange in that even though it is a black comedy, Adam Sandler is in a pretty dramatic role. The music is also quirky and unsettling. The movie never lets you feel comfortable. You are cheering for Barry (Sandler) but you don't know if he can keep it together. He is a man who punches out a bathroom and his office and buys a lot of pudding.

In his three and a half star review Roger Ebert says: "The film is exhilarating to watch because Sandler, liberated from the constraints of formula, reveals unexpected depths as an actor." He goes on to say: "I feel liberated in films where I have absolutely no idea what will happen next." He closes by saying: "Paul Thomas Anderson has referred to "Punch-Drunk Love" as "an art house Adam Sandler film." It may be the key to all of the Adam Sandler films, and may liberate Sandler for a new direction in his work. He can't go on making those moronic comedies forever, can he? Who would have guessed he had such uncharted depths?"

It's a hard thing to make a movie that straddles the line between comedy and drama and works in both worlds. I found the movie to work better as drama, but its quirkiness never put me off. The movie became more comedic when I thought about it later, but as I was watching it I was concerned for Barry.

A really enjoyable quirky comedy/drama/romance from Paul Thomas Anderson. Far from being a 2 star movie, except in the Maltin Movie Guide.