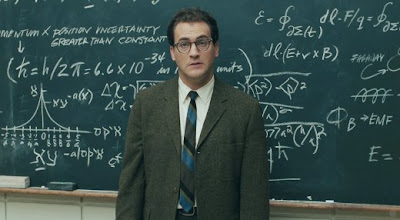 
Rotten Tomatoes Consensus : Blending dark humor with profoundly personal themes, the Coen brothers deliver what might be their most mature -- if not their best -- film to date.

In Leonard's review he says: "But one is forced to ask the same questions as the film's protagonist: What does it all mean (Other than "Life's a bitch and then you die.")

The movie opens with a scene in 19th century Russia where Velvel is helped by a man on the road and then invites him into the house. Dorais convinced that the man is a dybbuk, or a spirit, because the man died three years ago. She thinks they are cursed for inviting him in. When she stabs the man the husband thinks she has killed him, but she thinks he is just an evil spirit. What to believe? Where do we get our truths from? The spiritual world or the world that we can see and investigate? This scene sets up the movie and the story of Larry, who might be descended from this (cursed?) couple.

Larry Gopnik is a physics professor and he is first shown at the board explaining Scrodinger’s Paradox to his students, which says there is a state in which a cat can be both alive and dead, according to the laws of physics.

Larry thinks he has good life going but things are about to fall apart. His wife has decided that she wants a divorce; she would rather be with their neighbor Sy. The kids are going through the typical, trials and tribulations of the teenage years. Uncle Arthur, who lives with him, is making a probability map of the universe.

Larry moves out to a motel. As his world comes crashing down his son complains because F Troop is still fuzzy on the TV. Larry’s tenure committee is getting negative letters about Larry. When Sy dies in a car crash, Larry’s wife is really broken up. Uncle Arthur gets picked up on a morals charge and the police are after him for gambling. Larry says to a friend “Everything that I thought was one way turns out to be another.”

Larry tries to find out what was going on by visiting some rabbis. The first rabbi tells him that “You have to see these things as expressions of God’s will. You don’t have to like it, of course.” The second rabbi tells him a story about the message in Hebrew a dentist found on the back of a patient’s teeth. It said “Help me, save me” in a goy’s (non-Jew) mouth. The rabbi says he doesn’t know what the story means, but Larry wants an answer. He really wants to see the busy rabbi, Marshak. He tells his secretary ”I’ve tried to be a serious man.” The rabbi won’t see him because he is too busy thinking.

When Larry erases the grade of the failing student, for money, you get the feeling his world will really fall apart, and it soon does. His doctor calls to have him come in to discuss his x-rays from his checkup. As the movie ends a tornado heads towards them.

Some movies get better with each viewing and this is one of them. After I first saw it I wanted to see it again right away. It is a movie about ideas, about life, about spirituality, about what we believe. I really don't know what it is all about either, but I do know that I really enjoy it. A very good black comedy from the Coen brothers.