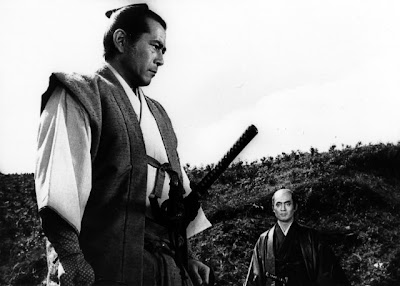 
Leonard 's review just gives a synopsis of this wonderful movie without really commenting on it's quality.

Set in 1725, the movie is an indictment of the samurai system. This was my favorite role for the great Toshiro Mifune. I think it is an interesting commentary on the loyalty to a system that had been so engrained in Japanese society. Isaburo (Mifune) decides that family is more important than the samurai code. In the petition that Isaburo and his son Yogoro write "It is the cruelest form of tyranny. It runs counter to the laws of humanity and cannot be condoned."

The movie makes the point that the clan, or the state, is not always right. The Laws of Humanity must come before the laws of man. Director Masaki Kobayashi is making a very strong point that it is a man's duty to rebel and fight against tyranny, which was very unusual for films made in Japan.

The scene in which Isaburo finally decides that he must rebel, and relief floods his tortured face, is one of my favorite scenes in film. When a servant asks abou the mats he is putting down he says: "The mats? A custom at these times so our feet won't slip in the blood."

Without a doubt one of the best samurai movies ever made. A great, great film.