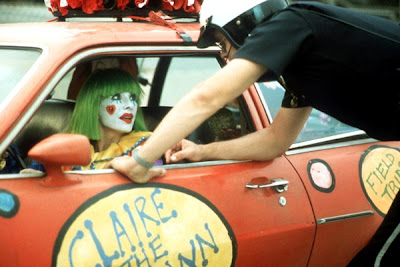 
Leonard says in his review: "As a feat - a directorial achievement - it's something to behold and admire, but as entertainment it's less rewarding."

The film is based on the short stories by late American writer Raymond Carver. The story revolves in short cuts between nine vignettes in which we are introduced to few dozen characters. All of those characters are faced with variety of problems. A couple’s child gets hit by a car. A couple is always fighting and one of them hits a child with her car. A couple breaks up and one is having an affair with a married policeman. A police officer’s wife hangs around with the unhappy wife of a doctor. A husband is unhappy with his wife’s job as a phone sex operator. Guys on a fishing trip find a dead body in the water but leave there while they go on fishing – why ruin the trip?

Anticipating the movie Best Picture winner Crash, made eleven years later, this movie is probably better. People in one story briefly bump or crash into the lives of people in another story. Sometimes the cuts are only on the screen for thirty seconds before we flip to another story. In the hands of anyone else this would probably be a mess. In Altman’s hands it turned out to be a gem.

Each story is interesting and well done. In each one you are anxious to see what happens. You are left anticipating the continued story of eight others while you are watching the one currently on the screen.

It doesn’t seem like this is a movie that could work but it does. It also doesn’t seem that at 187 minutes it could sustain your interest but it does. As a matter of fact the movie goes by very quickly. It is actually like watching nine short movies. The stories are not happy. Each one is its own mini or major tragedy. People are constantly doing things to hurt the ones they love. Some people don’t deserve the pain they receive, others do. Why? there are no answers. It just happens. Robert Altman didn’t present a Capresque view of the world, his view was much darker. We live, we suffer and then an earthquake hits. We are all prisoners of life.

Leonard said in his mordant review : "Mordant mosaic of unpleasant, unhappy lives in Southern California." He goes on to say : "As a feat - a directorial achievement - it's something to behold and admire, but as entertainment it's less rewarding."

A wonderful movie that needs to be rated much higher.