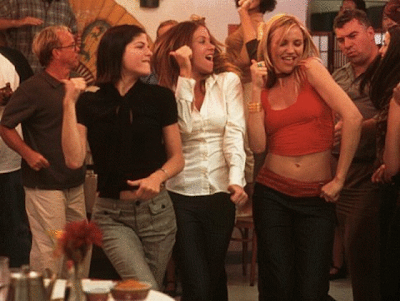 Rotten Tomato Consensus: A collection of hit-or-miss gags tied together by a thin plot.

I kind of liked what the critics on Rotten Tomatoes had to say about this movie :

This picture is one of the flattest, stupidest, unfunniest sex comedies -- as well as one of the worst all-round pictures -- I've ever seen. - Chales Taylor Salon.com

Loses its sense of humor in a vat of failed jokes, twitchy acting, and general boorishness. - James Berardinelli

Remember the movie critic Sony invented to give their films good reviews? Not even he would like this movie. - Joel Siegel

If a date suggests the two of you should go and see this film dump them. - Harry Guerin

The Sweetest Thing has nothing insightful to say about relationships, and nothing funny to say about the singles scene. - Richard Roeper

This is not a good movie. It's deep-sixed by a compulsion to catalog every bodily fluids gag in There's Something About Mary and devise a parallel clone-gag. It knows the words but not the music; while the Farrelly brothers got away with murder, The Sweetest Thing commits suicide. - Roger Ebert


Believe me when I tell you that the above quotes are much funnier than anything you will hear in The Sweetest Thing. If you are ten years old than you might find some of the jokes funny, but if you are ten you shouldn't be watching this.

This is a movie that makes Porky's look like Shakespeare, and that is not easy to do.

In his review Leonard said: "Attempt to put good-looking women into the kind of raunchy comedy usually associated with guys is wildly uneven, but hard to dislike." No Leonard, it isn't hard dislike, it was pretty easy.

Saying that it had a "thin plot" and it was "hit-or-miss" is a great compliment to this disaster. They had a Something Like Mary zipper situation, except this was even more over the top and not funny.

Throw in the Hollywood ending and you have the perfect bad movie.