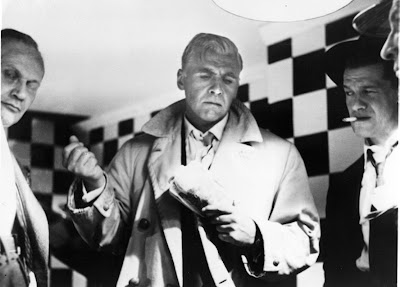 Bob the Gambler is a former criminal who is now a degenerate gambler. He is the coolest gangster ever portrayed on screen. He never seems to win at gambling but he is still respected by everyone. The younger gangsters look on with admiration and the older gangsters tell his stories. Bob epitomizes class. Rolling the dice, playing cards, checking out the horses at the track; Bob lives the gambler's life and he looks good doing it.

Bob never seems to win and is always broke. He is slowly working his way through his savings. When Bob hears about 800 million francs being stored in a casino's safe he instantly decides to take a chance on it. "The job of my life": he says.

The movie then turns from gambling to the plan to rob the gambling house. Bob becomes much more serious as the plan begins to take shape. The first thing that he must do is assemble a team, and he decides on a team of eleven. Bob then puts the team through the paces as they rehearse for the big day.

On all teams like there is a weak link. Usually the weak link is in love with a beautiful woman who is going to drag him and the team down. It is the fatal flaw in man that all the planning in the world can't account for it. But in addition to this flaw that most noir films tap in to, Bob himself also had another flaw, "as nature made him."

I've seen the movie a dozen times and it gets better on each viewing. Stanley Kubrick thought so much of Bob le Flambeur that he refused to make another crime film, stating that Melville had already made the best possible one that could be made.

Jean-Pierre Melville's homage to noir and American crime movies is a classic in its own right. It's light tone and beautiful look were a big influence on the French New Wave directors. Saying that this is a three star movie is like saying Lou Gehrig was a pretty good hitter. This is a movie that should be watched, cherished and then watched again.

"Act tough in bed. Not here. I told you never to tell a dame anything."

"Now Bob will play his last hand and destiny will be fulfilled."

"This is Bob Mantagne the Gambler as nature made him."

"Lady Luck, his old mistress made him forget why he was there."