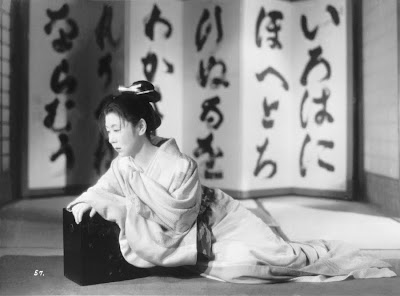 Kenji Mizoguchi's movie opens with an elderly prostitute telling a story of how she has just been rejected by a man because she is too old. The movie then flashes back to tell the story of Oharu, a young woman who in her younger days worked as a lady-in-waiting at the Imperial Palace of Kyoto, but having fallen in love with a man, who was below her rank. When the relationship is discovered she is brought before a judge and she and her parents are forced to live in exile.
When Oharu is selected, because of her looks, to be a concubine for a powerful noble whose wife can not have children, her parents are thrilled. Oharu is less than thrilled about “Going to a man I don’t know just to bear his child.” Despite her wishes, her father accepts the offer for her. When Oharu has a baby she is actually pretty happy. However, once the baby is born she is no longer needed and she is sent home. Her parents are devastated because they thought they would use her influence at court to get rich. Her father decides that he has to sell Oharu into prostitution. She is told by her manager “You’re no different than a fish. We can prepare and dispose of you as we like.”
As her life goes on her bad luck continues. She marries but her husband is killed. The downward spiral of her life continues. She ends up as a prostitute begging men to be with her. But then her mother finds her and tells her that the old Lord has died and her son is now Lord of the castle. But when she goes to the Castle her son’s advisors castigate her for the life she has led. She is sentenced to a lifetime in exile.
Mizogachi makes a very early plea for the rights of women and points out how degrading and unfair arranged marriages were.
Was there ever a more powerful movie made about the unfair way that women are treated in society? Probably not. A bleak, depressing, uncompromising tragedy that is a tremendous movie on all levels. It is also a very important movie. How many places in the world are women still being treated unfairly?